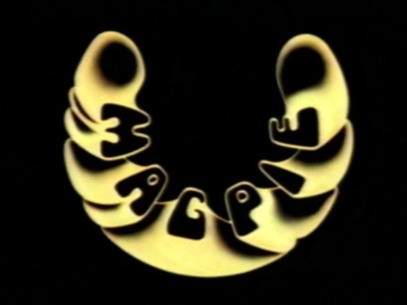 Bear with me as I just want to set out the slightly odd logic that got me to here.

While walking along the banks of the Ouse towards Hamsey, mist rising off the sky soaked water, a chattering Magpie swooped and settled on the dewy path in front of me.

how are Mrs Magpie

and all of the other little magpies?

Thats what I should have said at least, if I were a man truly stitched into the natural fabric of Albion’s rolling, rural majesty and the echoes of our medieval ritual and lore. But it was in fact the Magpie theme tune from the 1970s children’s show, with accompanying electric moonage graphic intro that came to me first, through a rose-tinted mist of Angel Delight, It’s a Knockout, Berni Inns [the Tudor Tavern in St Alban’s to be precise], ABBA, and Susan Shanks.

This was closely followed by an passing echo of Radiohead’s:

How are we today

Now you’ve stolen all the magic

And took my memory

At which point I settled back into the familiar One for Sorrow, Two for Joy, Three for a Girl and four for a Boy refrain. And it was the word Sorrow that finally popped to the top of the pile in my head.

As I walked I remembered a passage in Stephen Pinker’s book, Enlightenment Now which alluded to Sorrow and something about pandemics.

For those who might not know him, Stephen Pinker is a Scientist first and foremost, the Johnstone Family Professor of Psychology at Harvard, and an Elected Member of the Academy of Sciences. He is also an advocate of Eco-modernism or what some call Eco Pragmatism, and actively refutes any attempts to create a morality play around issues concerning the environment and climate change. He dismisses the positioning of these arguments as being those of Good vs Evil and rightly questions all of the incumbent fanatacisms that come with that framing from either side. To some Green Revolutionaries and Climate extremists this places him firmly in the opposition.

Why had this Sorrow Pandemic thought demanded revisiting? Because recently in the pursuit of seeking out and discussing positive outcomes from our current crises, I’ve been reminded that some, especially those at the bleeding edges of the Environmentalist establishment [and yes, you are as much of the established order now as those you damn], see the crisis unfolding around the world as licence to make unrestrained and slightly gleeful statements and exaltations about the impacts of COVID 19.

There is no doubt that this cloud does contains a multitude of silvery positives. That there is barely a plane in the sky, no travel to speak of, a collapse in oil demand, a shrinking if not collapse of unfettered consumption, the return of certain ecosystems to their purer nature [the canals of Venice’s return to beauty is a much trumpeted benefit of the collapse of its tourism trade], and a general re-engaging with nature in all of its glory are indeed to be somewhat thankful for. But they come at a price.

There is also a sense from some that COVID will act as a great leveller, and that, just perhaps, this crises may lead to a shrinking of inequality in the world; a rebalancing in favour of smaller living and needs and a greater balance between humanity and the natural world.

The upsides are plain to see. But where my issue lies is that these upsides often seem to be dislocated from the downside price we will have to pay for them – and what’s more, unfettered from whom will pay that price eventually. It is that dislocation that concerns me. And it is the glee present in some of the exhalations that pricked me; the whiff of a misanthropic, Thanos-shaped righteous mania that is in need of checking, in my humble opinion at least.

The piece I remembered was in fact to be found in his chapter on Inequality, and if you’ll bear with me I’ve reproduced it below in its entirety:

‘The historian Walter Schneidel identifies “Four horsemen of Levelling”; mass-mobilisation warfare, transformative revolution, state collapse, and lethal pandemics. In addition to obliterating wealth [and, in the communist revolutions, the people who owned it], the four horseman reduce inequality by killing large numbers of workers, driving up the wages of those who survive. Scheidel concludes, “All of us who prize greater economic equality would do well to remember that with the rarest of exceptions it was only ever bought forth in sorrow*. Be careful what you wish for. ‘

There it was – careful what you wish for. In reading this I had mentally added to Sheidel’s prize of greater economic equality those of greater environmental well-being; an equality of possibility for all regardless of gender, colour, creed or background; a reduction in industrial carbon emissions; greater respect and care for the creatures we share the planet with; a return to less nihilist consumer tendencies; and a general rebalancing of humanity and planet.

All of these are eminently desirable, but must exist within a universal order under natural laws, and therefore there are losers and losses to be accounted for with these gains. Positive and negative externalities. We must be cognisant of that.

And this is where I come to my point [at last].

I have a simple request to those whom might quietly caw and reel and dance as the old order burns about them – the price for your glee is being carried by human beings who do not necessarily deserve your dance at their despair.

To punk and pimp Yeats:

But I being poor have only my sorrow:

I have spread my sorrow under your feet;

Tread softly because you tread on my sorrow.

Before you say or do anything in celebration of the upsides, just be conscious that there is a bill: the loss of hundreds of thousands of lives; the deaths of precious loved ones, the loss of millions of jobs and the supplementary well-being and progress they bring to individuals, communities and economies – and a severe loss of momentum on the social and technological progress that might just accelerate humanity out of the poverty that fuels so much of what’s wrong on the planet.

In his chapter on The Environment, Pinker quotes Indira Ghandi; ‘Poverty is the greatest polluter.’

If we only look to the negative environmental impact that historic and more recent scale industrialisation brings and discard the fact that the advances inherent in these epochs have in turn raised millions out of poverty, of course we will see a doomsday scenario.

Pinker’s book reminded me that for all the degradation and diminishments the industrial revolution and subsequent technological advances have bought [and he does not shy away from pointing to the dreadful scale of them, and equally the role of tyrannies of both the extreme left and the extreme right in escalating them], he reminds us that once the leverage of progress has lifted millions out of poverty and away from scratching a daily subsistence, they are able to raise their eyes and minds to higher-order issues and challenges that might face us not just as individuals but as a collective.

In the act of liberating millions from poverty, enlightenment stops being the exclusive preserve of a small cabal of highly-educated and righteous minds exercising the luxury of their conscience above everyone else. Enlightenment becomes democratised across millions, eventually billions, of people – and through that enlightenment comes the responsibility it brings.

The rise out of poverty allows any society to educate and enlighten those liberated millions to the positive and negative impacts of our existence, both on each other, the environment and on the planet as a whole – and it elevates and accelerates that society’s ability and capacity for making and acting upon smarter choices. There has to be some good in that.

And in regards to a point I made earlier, whether Pinker is the opposition or not, here’s a thought in regards to how we might nurture greater consideration and consciousness of others in the machine of all of this.

Break out of your echo-chamber. Every now and then. Move away from those that celebrate the same beliefs and value systems as you and consume the same feedback loops of ‘suitable’ or relevant data that you consume. Read texts that make you feel uncomfortable; texts that hold the opposite of your belief system; texts that present research findings, insights and correlations that contradict those you usually rely on to support your beliefs – seek out the peta-flip-side to the peta-flop of big data points your echo-chamber usually feeds on.

Big Data and the feedback loops of insight and ‘truth’ it brings are the drug of Now. But this presents us with somewhat of a dichotomy. What makes one ‘truth’ right and the other wrong? Who decides?

What we trust and why is a shaded and complex thing, as Withnail’s provider of Phenodihydrochloride benzelex, Danny the Dealer points out:

Marwood: Give me a Valium, I’m getting the FEAR!

Why trust one drug and not the other? That’s politics, innit?

Why trust one ‘drug’ and not the other? Though the data point itself may be scientifically or statistically immutable and solid, it does not stop the purveyor, distributor and propagator of that data point ‘framing’ it for their own benefit and in such a way as to suit their immediate need. So for balance, and in search of illuminated self-enquiry, it pays us to see and contemplate on all sides. In doing that we might achieve a slightly more universal, humane and less partisan perspective.

You might of course align yourself with Saul D. Alinsky’s Rule for Radicals of polarity and extremity as the only way to drive transformative change. You may choose to remove any of the naturally occurring grey and revert to a black and white absolutism underwritten by the fifth rule of Ridicule and think ‘Fuck your Trumpist orange-man point of view’, in which case, enjoy your radical bully-hole.

You might be so delighted at the evidences of nature’s ascendency that everything else can go whistle.  That’s also fine. Unlike millions of people who still live under the shadows of poverty, tyranny, ignorance and degradation, you live in a society that treasures and upholds free speech and the application of free will. So you’re free to utilise your educated, enlightened mind to think and say what you like.

And if, given all of that, you quietly and simply don’t care; and see the doomsday scenario of natural reordering and devastation required to deliver your aims as worth cheering for in the face of others sorrow, then crack on.

All I would ask is this – that you and your opposites, those who trumpet and celebrate free-market dynamics and profit while dismissing the destruction and degradation they bring on humanity, our communities and our environment as a fair price for the gain, do us all a favour:

Get a room, and leave the rest of us to try and make the best of this.