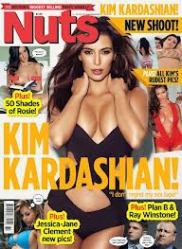 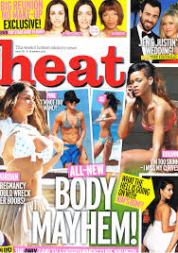 I’ve a question: should the shiny Sleb Real-Life magazines, with their desperate roller coaster of curves versus skinny versus Size 00 versus new boobs, all multiplied by the flashing needy neon  ‘Am I Sexy?’ sign of narcissism – should they join Nuts et al in being removed from the sight of young girls (and young boys), given that they are both potentially as likely to fuel conflicted and highly troubled concepts of socialised sexuality, self image and what pretends to be normal as each other?

If we agree that, to protect our small people and their sense of what’s normal in the body image and sexual deportment department, magazines that present the idyll of feminine poise as having pneumatic boobs and an alarming propensity for sartorial incontinence; clothes seemigly dispensed at the drop of a hat (though of course you are free to leave that hat on if a Rourke-Basinger sandwich is your thing) should be covered up, I’d like to offer up my own punt for Room 101.

‘Sleb Real life’ magazines – the “Ashley-ve Me Alone Says Cheryl” PLUS EXCLUSIVE 21st 19 year old Bulimic Kelly Marries Her Dad & 4 Page Pull Out ‘Diets To Die For’ kind – have begun to disturb me for reasons that have taken a while to reveal themselves. At first I felt I understood the standard argument: that mature adults – the women ( and men) that read them – know not to take them seriously and have the emotional intelligence to navigate them in such a way as to mitigate any ability the magazine might have to engender ‘unhealthy’ perceptions of self-interest, sexual attraction and body image in the reader. I have even worked on campaigns for Closer magazine and truly felt I even understood how people might use the real life dystopia and car-crash sleb life stories in some positive way – to self medicate the disappointments in their own lives, finding some form of redemption in the truths played out over page after page – that we are all equal under The Fate’s ability to dump on our eiderdown at any given moment.

Until, in a central London sweet shop, I see my 6 year old daughter, purposefully searching for Sparkle Comic amongst the magazine madness, alight on the Heat cover. She looks at me – and I see a question working its way from her eyes to her mouth – “Daddy, what’s a beach body?” A little wriggling and a few diversionary buckets and spade references later I’m in the clear on the bikini politics and the ‘whose Curves are whose’ conversation and we are distracted by the lure of dough balls.

But suddenly it struck me (the dichotomy that is, not the dough ball), considering that the ladies who grace the covers of heat et al seem to have a similar pneumatic tendency to the Nuts crowd (mostly being the same people) and equally, given that they seem to spend their whole life in a state of undress, how come we do not feel equally censorious?

Agreed, they tend not to have the same brash ‘get it here/look at my ta-tas’ posturing, and there is no direct link to them and a casual entry into porn as has been presented with the Loaded generation, BUT, in regards to being a casual and dysfunctional ‘educator’ of young girls and women in the social politics of body shape and sexuality, I feel they more than make up for it in the relentless visualisation and referencing of what is effectively body dysmorphia: drastic weight loss, physical augmentation, curves versus skinny, and ‘am I sexy sexy sexy?’ narcissism running riot.

In fact, I am now less and less convinced that this lava flow of body fascism, disturbed physicality, self loathing, and the desperate reaching for the unreachable that plays out over those pages leaves anyone unscathed, even the ‘mature’ balanced women who say that its all just a bit of fun. I am less and less convinced that they get out without shadow or stain. In turn I then wonder what a curious nine or ten year old girl must make of it.

I understand that the magazines I am referencing are not necessarily a primary driver in twisting young minds – the social pressures and personal schism and instability, both external and internal, that lead mostly young women towards at worst, the dark corners of anorexia, bulimia, self harm and at best a life of thwarted dieting and quiet self loathing are complex and labyrinthine  and not what I am exploring here.

Perhaps, it is just another falling shadow, the celebrity body edition, of the compare and despair society we are drowning in – “desperately seeking (Your Name Goes Here)” –  everything never quite good enough, never quite enough – the holidays we have, the clothes and shoes we buy, the meals we eat, the schools we send our children to, the kit we’ve got, the communities we inhabit – but ultimately the person we are, the shape we are, the size we are, the age we are.

Anyway, I digress. Back to the question:

the Thin Air Factory is committed to creating the kind of rare air from which great things might get plucked: whether it is an aphorism, a creative strategy, a global movement, an Ad, a manifesto, a product innovation, a new model of prosperity, a short film or a quip.

The name fell out of a story: a story about a Magician’s riposte to a lady who, upon seeing the Magician pluck a rabbit from nowhere said ‘Wow you just kinda pulled that out of thin air, honey, it looks so easy? “- to which the magician replied “Believe you me madame, the rabbit is easy, but it has taken years to get that thin air just right”.

I think we spend so much time, especially in the creative industries, concentrating on the ‘it’ – the piece, the moment, the creation, the reveal, that we easily forget how important the context is out of which that ‘it’ is plucked.

So I apply as much of my experience, curiosity, wonder, mischief and creativity to the context as I do to the ‘it’.

So, consider my digital throat cleared.