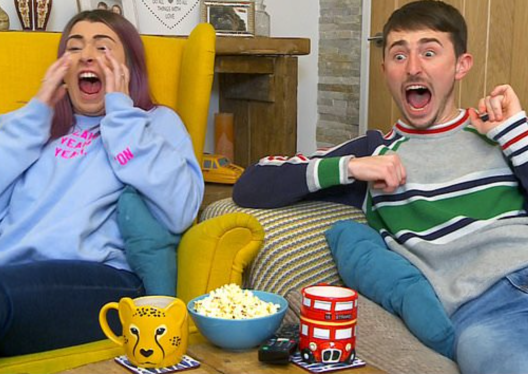 There is no better reminder in these C times of why things will be alright. Gogglebox reminds us that the genius of every British sitcom from Fawlty Towers and Sorry to Plebs, Shameless and the IT crowd is rooted in the fact that basically they’re us, but with a director and a cameraman attached. But there’s more to soul telly than meets the eye. And its just one beautiful piece of the puzzle

In the words of the master Blockhead, Ian Dury, that timeless funk-punk Chaucer, Gogglebox brings Reasons to be Cheerful, 1, 2. 3.

So let’s pick through those Reasons. Starting with the biggie. No. 1. Gogglebox is Soul telly. And I really need to be clear about what I mean when I say Soul Telly so we don’t get muddled up. For me there are many kinds of telly so I break them into four buckets just for my tiny brain to order them better.

First there’s Brilliant telly. Now Brilliant Telly is the Oh my God have you seen…? format of telly that people refer to as having ‘water cooler’ cache [though I prefer to call them Kettle Conversations as we’re keeping this British!]. Brilliant telly is the likes of: Blue Planet, Peaky Blinders, Killing Eve, The Nest. Brilliant telly goes off like a rocket and lights up culture and conversation.

Then there’s Reassurance telly. We all know this one. It’s the t.v. solution to ‘now THAT was a shite day. Is it wine o’clock yet? Right answer. Yes.’ Once the liquid and the nibbles are sorted [more of the later], next step, reassuring telly. The increased likelihood of Reassurance telly viewing can be mapped in direct relation to the degree to which you’ve had a shite day, are knackered, and simply can’t be arsed to start a new box set, navigate Catch Up or start a movie. At the intersection of all of those variables a moment occurs. ‘Modern Family? Love it. I’m well in the mood for that. Pass the Chipsticks and that full-fat hummus, right now.’   Reassurance telly is telly that is an old friend. You know each other and you are happy in each other’s company and it requires little effort on either part. And the biggest upside? You know you’ll have a good time and you shall go to sleep quietly happy.

Then there’s Nostalgia telly. V. different to Reassurance telly. Nostalgia telly does a very particular job. It is the televisual equivalent of sticking your thumb in your mouth and having a good old suck. Nostalgia telly is when you purposefully call up something that is as much a part of socio-cultural memory and history as it is of your own personal intimate memories. For me that can be anything from The Sweeney [the original] and Thunderbirds [the original] to Dr Who [the third one]. Granted some telly does a weird slip-shift thing between Brilliant and Nostalgia – Life on Mars and Ashes to Ashes are a perfect example of this. But don’t be fooled. These anomalies are Brilliant first and foremost. Nostalgia tends to announce its presence – like the screen format giving away the fact that it was built for the old television format. Porridge. Fawlty Towers and BlackAdder fulfil these things nicely.

And finally there’s Soul telly. And this is a transcendent level. Soul telly seems to be able to reach something that, to punk an old beer advert, other telly cannot reach. And Gogglebox is one of those for me. It is not just something I look forwards to; or something I love to watch with my family; or something that just makes me feel better.  It fundamentally restores my faith in a very British humanity. This is not solely reserved for reality formats. The Detectorists, a masterclass in gentle, wry, rolling storytelling  is one of the most sublime pieces of soul telly I have ever seen.

NOTE I have not included the slightly difficult 5th child. Shite Telly,  as I didn’t want either to pretend I give a shit or to intellectualise what is effectively shite by its very nature. And to be fair it demands a whole journey into the underworld of its own.

Now Reasons to be Cheerful parts 2 and 3 exist, in my world at least, directly in relation to part 1. This may be currently due to the lockdown and the country calling on us to park our arse on a sofa and crack on. But to be truthful, it’s not that much of a change for me.

When I’m not wandering around the Downs in my over-tuned trainers pretending I’m Wordsworth, or perched at my lap top typing stuff like this, or undertaking any of the various other task-based living that makes up my day, I can be found parked in a blue, poplin armchair in front of my television. [I can’t bring myself to call it a smart screen TV as it isn’t – it’s my mother’s old telly which I’ve never upgraded.]

Sometimes I am doing this with my children. And sometimes alone. But for the purposes of this piece I’ll stick with the version that includes nearest and dearest. When we do, as has already been pointed out, there is always some form of snack close to hand .

Which neatly brings me to Reasons to be Cheerful – part 2.

Yup. Snacks – or nibbles. Some form of savoury snack is always welcome – piles o’ toast. Crisps, chips n dips. [Naked Tyrells for me]. Or sweet stuff. Maltesers, M&Ms or some such chocolate. Chocolate Fingers. Whatever. [Be warned, it’s a bit of a push dragging 85% Patagonian cocoa chocolate with organic caramel splinters into this environment – a little like trying to watch Corrie with Donatella Versace but – everyone to their own.]

Make no mistake, snacks are REALLY important to the Reasons to be Cheerful. They are not discretionary. They are a pivotal part of the whole shebang. But, again, I cannot be generalist here. In this instance, for me, snacks require a nature of self-containment if not portability. Snacks need to come in a packet, bag, sachet, wrapper or box. Cakes should be of the already individually-portioned, or of the complete-format variety – for example; chocolate cake rolls or eclairs. Though I LOVE Marmite toast, marmite toast is a step or two beyond ‘snacks’. It is for want of a better word – un-contained. Toast? Fine. But Marmite Toast. It requires toasting – and the buttering – and then spreading.

It is no surprise that every one of the gorgeous, funny and highly individual families and units on Gogglebox always have some form of snack on the go, from expansive picnic-like extravagances, red wine and chocolate, to cup-a-soup, glazed eclairs, and spray cream. They play a profound role in the dynamics and integration of the people in the room. A catalyst to lean in.

One question that does arise in my mind though is why Dave, one of the Malone family’s dogs, doesn’t eat the piles of snacks and treats on the table? Plastic props? Discuss.

Which also brings us to Reason to be Cheerful – part 3.

There is something simple and human about the intimacy and proximity of the people in Gogglebox and the company they keep [even when they are not always human]. And once we’ve got beyond the slightly self-conscious construct or conceit of us watching them watching telly – a simple truth reveals itself to me every time.

We’re going to be alright. If this is a half decent mirror of British society, give or take a little tweaking around the edges, we will be fine.

I am uncertain as to the degree to which they programme tries to ensure that it is being ‘UK SAMPLE’ representative but there seems to be a reasonably decent balance between types and natures and backgrounds in the Gogglebox regulars with little preference shown to any one unit.

And as if we needed proof of the great leveller of it all, Celebrity Gogglebox simply proves that however extraordinary the things people do, they are still ordinary people. Whatever makes and bakes their fame, they are still broadly the same: same quirks; same glitches; same beliefs; same values; same need for simple acts of togetherness and belonging.

I am reassured by the fact that if I were to put a camera on myself I am no different. When I sit and watch The Detectorists while stuffing Tyrell’s Naked crisps in my face, nibbling a Malteser, or scoffing hummus with carrot batons [I just HAD to use that word], I am them. And they are me.

I am no different to any of them really. And the reason that makes me cheerful is this:

Before the big C popped up, we have been living arse-deep in divisive shite. If it wasn’t the strange and quite unpleasant hectoring and bullying of BREXIT, the utterly slippery nature of how all sides presented themselves at any given time, and the civil war of LEAVE and REMAIN, it was the hysteria of identity politics, with seemingly intelligent people sucked into messy, unravelling justifications for carving society into finer and finer pieces in some insane slice and dice race to the bottom of the self-assertion barrel. And however good the cause that one or other crowd or tribe might ignite, the nasty social smack-down bullshit of the echo chamber prevailed, and it got uglier and uglier and noisier and noisier. Cheerless, Soul-less. Charmless. Over protesting. Needy. Crooked. Divisive.

In Gogglebox. I see a celebration of shades of same. Not difference. And I think right now, out there, the majority of people are proving everyday in so many ways that shades of same are a beautiful thing. Something we’ll all stand up for and fight to protect. And it is not isolationist to look to our own first before we look to others across the world. We must secure the integrity of our society first and foremost. We’re no good to anyone elsewhere if we don’t.

And if Soul Telly, Snacks and Company underwrite that sterling effort… I’m in.