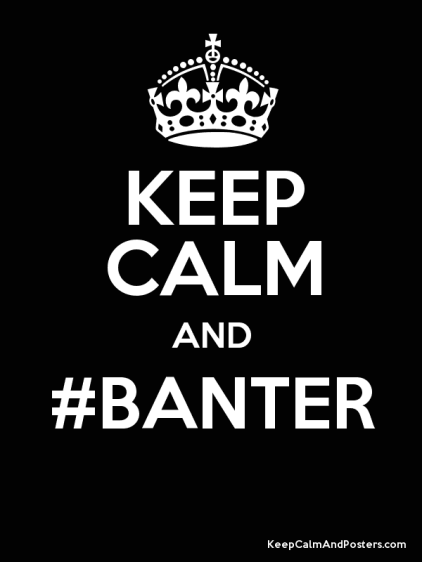 “Just a bit of fun. Think its what the Tommies used to shout in the old days when the Padre cycled past on his way to some bombed out Mass.”

“Blast from the past. We’ll be getting our knickers in a twist about the bloody Life of Brian next.”

“And with fair reason.”

“Well, bit of a hatchet job on old JC wasn’t it. And what about all that ‘hook nose’ ‘heebie’ ‘red sea pedestrian’ stuff?”

“Cant think the Jewish viewers enjoyed it that much.”

“Well, you cant be too sensitive can you.”

“Unless Jehovah is a really big deal for you and your faith.”

“Yeah, OK, but blimey, what next? Rename the next series of Luther because the Reformation Protestant purists are going to get all hufty otherwise?”

“No. I’m just saying be a little more respectful to people of faith.”

“Faith? You mean Religion. Faith is not the sole domain of the Holy you know.”

“Really? Faith comes in all shapes and sizes. Even the scientists need it. That M Theory is a bit of a leap of faith – nice theory but whoops no proof – but I cant see a molecular physicist getting all arsey about Hadron Collider gags.”

“M Theory – Hawking – chap in the chair – funny voice – believes that there is one total quantum truth for the whole universe – unifying all consistent superstring theories of the universe.”

“Forget the string – all I am saying is that until there is proof, that’s a leap of faith.”

“No need to get funny about it. All I am saying is that some people have a different cultural sensitivity to stuff like this. Things are sacred for them.”

“Oh, you’re not going to get all Sharia on me now are you.”

“Why not. The Jewish community puts up an Eruv. We all respect the significance of that.”

“God, can we just lighten up. All this stuff is just not…just not how we are. We just don’t get that worked up about this stuff.”

“Great. But other people do.”

“You’ll be banning banter next. And that’s just not British”

“What about Jihadi John?”

“What, the lunatic psycho Jihadi John?”

“Yes. Calling him Jihadi John – is that banter?”

“Jihad is a religious reference.”

“Yeah but no. Just a bit of name-calling. You’re in taking-the-piss-land mate. Get over it.”

“It’s a bit thuggish though isn’t it?”

“You know, all a bit lock stock and two smoking shashlik kebabs. Jihadi John. Cos he’s a Jihadist. Turkish cos he’s Turkish.”

“Well if you’re going to be like that, don’t say Thug.”

“That’s not religion! They were a criminal cult.”

“Look. All I am saying is that, you know, chill out. its a sign of a civilised society. Rising above all the voodoo and the mysticism.Being able to look at it and laugh. I mean its nuts some of it.”

“So a few billion people are all nuts?”

“Yeah. But to be fair most of them are so bloody poor they need some fantasy to believe in don’t they. A thinking person with a decent education – going to see the funny side of all that blood and wine and 70 virgins.”

“Oh OK. Got it. So by your reckoning profound soul searching faith is commensurate with poverty.”

‘Yup. Face it mate, the more stuff we can get a hold of in this life the less we need to negotiate our entry into the next. Why should I worry about 4 Hail Marys, Stamping on a glass and facing East”

“Blimey. So a couple of credit cards, a few fancy holidays and a new sofa and all forms of religion can get binned? You’ll be telling me that Wonga Loans and spirituality are conflicting belief systems next”

“God, you’re a right bag of laughs. Have you got a saddle for that very high horse you’re on? Speaking of horses; I’m hungry.”

“Yeah; Im starving come to think of it.”

‘What about that Herman Ze German. Hot dog & beer place. Wurst sausage I ever had!”

“Hallelujah. He has a sense of humour. Schnell.”

Living the Dream is a project that seeks a more meaningful and inclusive narrative for what good looks like by exploring the underlying narratives in everyday peoples lives at the intersection where prosperity, consumption and values collide.