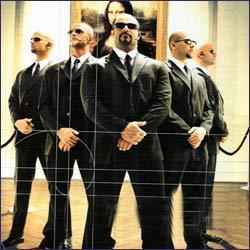 So a thought crossed my mind, of well-dressed men with violent hearts.

Strangely, it happened as I wandered through Regents Park. Perhaps it was the glance to the right through the trees to the security personnel standing outside one of the park’s beautiful regency residences – a member of ‘staff’ with a distinctly eastern bloc special-forces tilt to their gait, posture and physical presence.

Even weirder, the trigger was not the mallet-like, box-thumb hands that could squeeze the life out of me in a heartbeat (a stalled one that is); or his potential tightly-wound, to unleash unholy and highly trained hell armed or otherwise on any kind or number of assailants.

It was not even a sudden turbulent curiosity cloaked in too many spie films about special ops backstories; or on what continent or continents his personal attritional signature might have been developed.

It was actually the cut of his suit.

Yes, amidst the wealth of possibilities for curiosity to be pricked, it was the sartorial that leapt to the top of the pile for me.

The reason it did so was held in the fact that there was the shadow of something terrible about him. But it was not held in his potential for murderous activity or at the very least, its highly painful and vaguely psychopathic cousin, maiming.

The suit was the signature of his own demise. His whole sartorial self, was stained with a destiny more aligned with the dusty bottom of a builder’s skip behind some grand hotel In Budapest, than it was the baize surface of a blackjack table in the Sporting Club in Mote Carlo.

Now, to be clear, the look I am describing is not to be mistaken for just plain bad, really cheap or misguidedly chosen clothing and everyday wear.

This also should not be seen to stumble into the wardrobe of the ill-fitting porter’s uniform, the one size too big overcoat of the hotel doorman (with give away chasm between the back of the coat collar and shirt collar). And this absolutely should not under any circumstance be mistaken for the shambling borrowed suit look, quite popular at weddings and court appearances (thought the latter might come the closest).

The suit was dark blue – almost black. But the vents were a little too over stated; the lapels a little too obvious. It was slightly ill fitting. His shoes were exceptionally well polished.

There was nothing of the stealth-wealth class enshrined in the uber-discretion of Commander Bond’s suit, personally cut by Gieves, an open stitched silk shirt, shod in a well turned pair of Lobbs, a understated pochette off-setting the breast pocket.

The benefit of the minutiae of class correctness and breeding and having been around money and its vestiges all one’s life, means that invariably smart clothes are worn comfortably, a cloth skin which the wearer is happy in, regardless of whether they are loose or tight, cheaply accessorised or expensively purchased.

(Though to be frank some might think otherwise having spent an afternoon in the company of the finer, older end of the British aristocracy: where one could be forgiven for thinking that the ladies from the tills at Sainsbury’s had popped on a frock and picked up the male vagrants from the local AA meeting on the way round to the Manor House.)

Having spied this man, and as my mind wandered through a picture album of gangsterdom and thuggery I realised that it was the same reoccurring theme.

Everyone looks like they’re dressed in their funeral suit.

To be fair these types of men are built for attrition. Built to haul, bludgeon, rip, cut, break and prevail – whether that is with a sharp plough across a barren field, with a sledgehammer about the head of fence post, with a weighted crane wire on a Rig, with the brittle fingered winching of a north sea haul, or with a hand, knife, gun, grenade or club across another human’s being.

But unlike their forebears, whose best suit only came out for a wedding and a funeral, these men wear the wrapping of wedding and funeral as their work clothes.

Perhaps it is because their lives are marked on a potentially much shorter trajectory than everyone else’s that they need to live (and wear) all of their lives at once.

But there suddenly was the striking truth of it for me.

Theirs is a look of the open-coffin funeral. They have the look of a dead man walking.

The Security personnel had that way of letting their arms drop in a V in front of them, crossing at the wrists, with one hand placed across the other at hip height.

It takes little for those same wrist-crossed ‘hand-over-hand’ arms to move upwards towards the middle of their chest to a point of eternal peace and repose – like some stone hewn sculpting of the great knight at their final rest atop the crypt.

So, the open coffin look; that of a corpse in slightly ill fitting suit they rarely or ever wore, shoes over shined, plasticky and new. The body deflating before one’s eyes, collapsing back into the folds of the suit as the last sub atomic vestiges of their living self leave the cadaver.

And now that I think back to everything from pictures of the Rat Pack and their ‘Italo-American’ Minders, to Russian secret policemen around the Kremlin, to bouncers in any city, to the petite gangsters of any over cologne cocktail bar, the look is the universal look of the Funeral.

I realized that these men seem to have raided the dressing up box of the funeral home, and perhaps there is something bleakly fitting in that they are dressed for a funeral that might given their job come to them, far quicker than you or I.

At a more rarified level, the relationship between men of violence (be they Kings, Tribal Warlords or Gangsters – there is little difference to be fair in their differing shades of socio-psychopathy) and the sartorial plumage of success is long established.

It seems that preening either pre or post violent Armageddon seems to fulfill a number of roles.

CIVILIZATION – To cloak the generator of said violence is some form of cloth grandeur and reward – like an animal skin post the brutal hunt – wrapping oneself in the prize of your violence is quite a primal past time.

ACQUISTION Equally, plunder in the shape of Cloths of gold and silk embroidered with gemstones were the first thing the status-thirsty barbarian would plump for post massacre of the innocence or après a little light butchering of the fat pigs of mercantile avarice.

UTILITY It is worth also remembering that filching a rather natty pair of strides, boots or a well made greatcoat has been the historic stock in trade of most everyone from gunslingers in the wild and rather badly dressed West to soldiers traipsing through thirty below along the Eastern Front – both the Napoleonic and WWII versions.

So the idea of clothing in some shape or form as trophies of violent conquest or subjugation has ‘form’ one might say.

But most particularly, it is in the suits shirts shoes and accessories – the lizard skin belts, Gucci shoes, encrusted Rolex watches – of the modern day gangster that we see the preening version most vividly adorned – a modern take on the look passed down through the folklore and photographic record of the Italo-American mobster and those that aped their fashionable aspirations – of the poor kid done good; taking their place besides the senators, sages and celebrities of their age.

(Note I have not included the Afro- American and Anglo-Jamaican street gangs in this note as their sartorial aspirations broadly lie in the polar opposite direction – drawing from the dime store sports clothing rip offs and cheap synthetic shirts of their poor streets and the ghetto penitentiary look of the slung trouser inmate of the US Penal system.)

The UK mobsters of the late 40s 50s and 60s were little different to their American cousins and their middle european counterparts. London gangs sported a similar uniform of gaudy suits, over stated silk shirts, razor sharp ties and shoes – over styled and over cut.

To make such an observation may seem flippant in such times, when the news is filled with so much unholy (or for many and to their eternal shame) holy murderous brutality being unleashed on so may innocents by dreadful mobsters, warlords, politicians, tyrants, sovereign states and laughably-lauded Royal Houses.

But maybe in doing this I am searching for a way of easily identifying all of those who have this easy brutality in them.

My reasoning being that if one was able to pinpoint them that easily, and on a global scale, perhaps, and just perhaps someone’s god or gods somewhere, or some form of omnipotent being, or even a calamitous act of science (think Big Bang but on a smaller more human scale, with laser like targeting, really nasty Kevlar piercing particles and an eye for badly dressed violent men) would wipe their faculty and kind from the face of the earth.

The other problem is that in promoting that scale of vengeful murderous ugliness, I would become just like the men in bad suits with violent hearts: which is a nightmare.

Final destination: a box which, as Ted Moult put so beautifully for so many years, is fully air tight with hard wood surround.