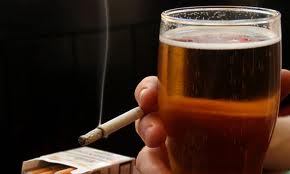 An easy outcome to predict surely? Judging by the response in your average CSR or Responsible Business Jane or Jonny to the merest mention of the potential for working on developing a CSR strategy for a tobacco company predicting the winner looks like a shoe-in.

The sudden onset of both a prostrated writhing fit of conscience and a vertiginous nose-bleed from foot-stamping across the moral high-ground is a bit of a give away.

But mention the same opportunity with an alcohol business and barely a murmur of approbation.

So, cigarettes are CSR Satan. They lose. Booze wins – every time. SmackDown!

But I am curious (and not just because I am a sometime smoker).

Both cigarettes and alcohol cause escalated ill health and death, fuel anti-social behaviour, nurture toxic generational legacies and put pressure on the civic services and health systems of every country in which they thrive. But to be fair, in the sudden death and disorder stakes booze seems to rises majestically above the other in so many ways.

So, why does the Booze business seem to get off lightly relatively speaking in the smack-down world of CSR integrity?

I can only imagine it is a legacy of the ‘great lie’ by the cigarette companies – their wilful and criminal lack of disclosure of what they knew to be true and subsequently their accountability for causing the cancers and critical illness the habit engendered in the millions of people they continued to coerce into a highly addictive and carcinogenic habit in the full knowledge of the deceit they were perpetrating and its possible consequences.

But put the booze businesses under the glass and, bar the ‘big lie’, the rest is right up there.

Some would contend that the booze businesses have a very healthy track record in using aggressive pricing and promotional strategies to drive up harmful levels of consumption and nurturing potentially addictive habits and behaviours in drinkers, especially young ones, in both emerged and emerging markets.

One might also point to a rather convenient blind spot around their seemingly primary role in the creation and escalation of the socio-cultural distemper and degradation undertaken ‘under the influence’.

Anti-social behavior, public disorder, domestic and sexual abuse, escalated violence, underage drinking, critical illness and injury, often leading to fatalities, and the subsequent financial and resource pressure that boozing and boozers bring upon the health and social services are but a few of the things that can popped on their doorstep.

Yes, ok; the Portman Group. I get it. Nice flagship of concern. But I can still find outrageously priced multipacks of low quality booze on most shelves and very little in the way of policing of underage drinking (and I’m talking the ‘8 year old found drunk in public park’ kind of underage drinking – not the ‘whoops the 12 year olds’ dug out the bols advocat from the drinks cabinet and made themselves sick at Christmas’ kind).

It does not help matters that there are a few ‘get out of jail cards bandied about by both parties – those of the “we are just supplying an existing demand in a world populated by consenting adults exercising their own free will” variety – Ole!

And the truly skilled ‘diplomat’ from either side can also muddy the pitch with a casual reference to the complicating factor of the role of ‘pop culture cool’ in driving habits and behaviours.

Pointing to the legendary status ascribed by society to the highly addictive tics and traits of celebrity ‘substance – pick a substance, any substance’ abusers and their central role in inspiring behaviour – The Dorothy Parker meets Charlie Sheen multiplied by Lord Byron and Edina from AbFab to the power of Sherlock Holmes; all to the square root of Oliver Reed Effect – is fair enough.

But really, the disparity in the scale of healthy approbation aimed at one versus the other needs readdressing if we’re going to get any clarity.

If it is simply the ‘great lie’ that demonises the tobacco industry over the Booze industry I think we might need a, well, rethink.

Why? Because I fear that in the absence of any super smart and ‘purpose beyond profit driven’ minds to help tobacco businesses and their hundred’s of thousands of employees and suppliers navigate the journey from toxic shocker to a tobacco based business devoid of cigarettes, the likelihood that there will be any real progress is small.

And all the knee-jerk howling simply serves to give their boardrooms ample excuse to rarely and barely engage in the real root and branch reforms, product innovation and reconciliation that would need to happen to ‘civilise’ the industry.

Until the howling stops and we climb out of the archly worthy teenage debating society when it comes to the cigarettes debate we cannot claim to be taking any high ground – quite the opposite. We are a lynch mob to the thousands and thousands of people who earn their livelihood from the Tobacco Industry.

Throwing bricks from the outside might be fun: but the real courage would be that demonstrated by someone who chose to climb inside the beast and try to effect some real and meaningful change.

Till then, I say lets put on some brightly coloured lycra, bring in the baying mob and get back to that smack-down!